Let me tell you about roguelike games. I'm new to them, apparently, and now I know why. Turns out they're not my favourite. Turns out, I'm horrible at them. Turns out, while I completely disagree with the statement that video games cause violence, if any genre of video game is going to cause me to rage it's the kind in which one of its primary features is that when you die in the game you really... really... die in the game.

Cat Lady, while adorable with its fantastic music and great characters, is this kind of game. So here I am, a little over two hours of playtime into a fancy private beta for the lovely Cat Lady, and I've rage quit. Well, not "rage" so much as "cautiously set down the controller and walked away knowing it's currently in my best interest". I even came back the next day and gave it another shot and nope'd out real quick.

As beta weekend comes to a close I sadly hang up my mittens without even getting past the basement level. Going way back to the very beginning no matter how far I did or did not progress, losing all upgrades, no save points, random health generators and rarely when I need them, etc... It just hurt my soul. But knowing that the genre and this kind of game play is not for me I am putting all of that aside, and offer you what I hope is my most objective outlook on this potentially lovely game. This is my reflection on a preview of the beta version of this game, not the final version for release.

In Cat Lady, you play a girl named Ally Marie, who discovers that an ancient evil has taken over her Grandma's mansion. Grandma's items are possessed and her cats can talk, so basically it's like Beauty and the Beast, except more evil and with more cats. Those two things are not related (like more cats does not equal more evil) since you in fact use the cats to fight the evil. Though I didn't get past the basement level, I do know that there are some major bosses and multiple levels and maps.

The various cats you encounter are your weapons which you can collect and upgrade for more pew pew (or mew mew) power and trade kibble for health and other upgrades. There's even a robot cat that you can set as a turret to fire off some lasers on your behalf, and one that hides in a box and swats at the bad guys. Genius. Clearly the developers have cats. 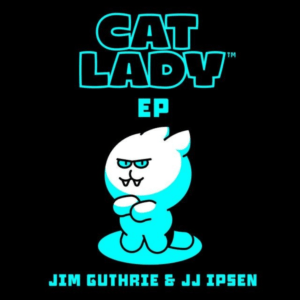 As for the music in Cat Lady, it is in equal parts adorable, fun, and spooky. Especially with Halloween around the corner I'd scoop up the soundtrack in a heartbeat! And GUESS WHAT! You basically can in this Spotify playlist of the soundtrack EP. It starts out with a track called "Mew Mew Mansion" so you can see why I would've loved this game wholeheartedly if I'd been better at it! The music was well matched given the fun of using cats as your weapons in Grandma's mansion and the spookiness of the monsters and ghosts that come after you.

The mechanics worked well, and the controls were smooth (I played with my xbox controller on PC). Since the game is in beta, several bugs were identified and reported by other players. Cat Lady's developers, Rose City Games*, are very receptive to feedback provided in their discord, so I anticipate most of those bugs (usually inaccessible loot drops or strange enemy behaviours) being cleared out by the time the game is formally released.

Visually it's a pretty dang cute. I wasn't sure if the black playground with neon unicorn-coloured characters and setting was going to work for me but I got used to it instantly. Dark mode for the win, I suppose?

Either way, though I know this game isn't for me, if you are into these punishing roguelike games and you like cats, I expect you'd love Cat Lady.

Personally I'd give it a 2.5 paws out of 5, for me, but for fans of roguelike, I expect you'd probably give it 4 paws.

*Rose City Games is also the developer of Garden Story, one of our favourites from Pax West 2019 and Seattle Indies Expo (SIX).

Sphinxy is a Mixer streamer at mixer.com/sphinxy. She plays a variety of games leaning towards casual, fun and RPG gaming, the likes of Minecraft, Stardew Valley, Assassin’s Creed: Odyssey, sims and city builders, Final Fantasy, Lego games, and indie games. Opinions are her own and do not necessarily reflect those of Tri-North Studios.

A first look at the psychological horror game Infliction by Caustic Reality, published by Blowfish Studios. […]

It’s a new year and a new opportunity to connect through the interests, hobbies, games, and media that bring us together. We brought some great content out in our soft launch in the fall of 2019, and after a short break, we look forward to providing more game reviews, videos, podcasts, and much more your way! […]

Welcome to M³ Tech Talk! In this new podcast from Tri-North Studios we’ll deep dive into the details about the hardware behind our broadcasts and streams–from cameras, to PCs, to audio, to the software and hardware that runs everything we do. […]