Sometimes I let myself down too easily. "It wasn't meant to be." "You tried your best." "Maybe you should try something you're good at." Or just a simple "Meh." I mean, I'd never buy one of those 'Nevertheless, she persisted' shirts because even though I can be stubborn, sure, I also let myself give up. I walk away. I move on. I let go. I used to think this was a good trait, but I'm not sure now. And this leads me to a confession...

I got all the way to the end boss and wasn't high enough level, but got too bored with the grind and never followed through. I didn't finish FF 8, or 9, or 10, either.

But I did manage to finish FFXV because I fell in love with the characters so much that I had to see it through, and had zero regrets. That's not to say that I didn't love the other Final Fantasy games, but that I suppose I've grown since the days of being a bored teenager who let herself down too easily. Maybe. A little bit. But this isn't about Final Fantasy (that's next month). This is about Ori and the Blind Forest. 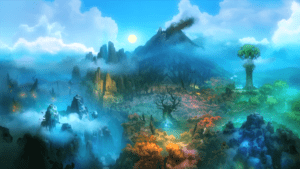 First of all, no one told me that I'd be sobbing within the first 5 minutes of the opening. Like full on ugly cry. And second, I don't like difficult games. I avoid them, so yeah I didn't play this game until 2020, because everyone seemed to say, over and over again, how difficult it was.

I game to relax. I game to hang out with my friends. I game to distract myself from the things in my life that I don't want to deal with or think about. I game to be entertained and moved by stories and characters that are often just as fully fleshed out as a novel or film. So I don't usually play games to challenge myself, and Ori and the Blind Forest challenged me, as I heard it did for so many others. But I urge you, if you've avoided this game or quit it mid-way through in frustration, to try again. It feels so worth it.

I don't know what it was about this game that pushed me to keep trying. It wasn't the plot to pull me through the story–there isn't much. It wasn't the characters–Ori, well, she doesn't talk much as cute as she is. It might have been the scenery because Ori and the Blind Forest is simply one of the most beautiful games I have ever played. It might have been that Ori reminded me of a spirit that didn't give up, and I needed that spirit. If I gave up then Ori gave up, and I just don't think Ori would do that.

So, as much as it frustrated me, I couldn't quit. As much as I wanted to let it go, and as much as I actually texted "I just rage quit Ori" to a friend, I could not actually give up. So I went back. I tried again. I died again and again. I walked away. I came back. I played it through in little chunks, level by level. I relished in the times that I got through the difficult parts. I was ridiculously proud of myself, a crappy gamer, for continuing on. And yeah, maybe I'm a bit motivated by Ori and the Will of the Wisps coming out later this week, so I'm pushing myself to get through this so I can play the next, but it's more than that. It's the satisfaction in knowing that I don't have to give up so easily.

Full disclosure, at the time of writing this now, I haven't finished the game... but I know I will. I will do whatever it takes. And honestly, that feeling is all I needed. I don't have to let myself down again.

So thank you, to all of you who make games that are too good to give up. Who reward us when we persevere. Who make us feel a sense of accomplishment. Who teach us the lessons we need to learn when we're ready to learn them.

And thank you to you-know-who-you-are for, possibly unbeknowst to you, pushing me to try harder, to not give up, and to get good.

I guess, nevertheless, I persisted. Maybe I can go buy a t-shirt now.

The day after publishing this post, just a few hours after Will of the Wisps was officially released, I did it. I finished Ori and the Blind Forest. Such a beautiful, heartfelt ending on a simple but wonderful story (no spoilers!). I had no idea I was so close to the end and then suddenly, there it was! Such a pleasant surprise. I have tears in my eyes for a multitude of reasons. Just one of which is the fact that my Xbox crashed the game in the middle of the final cut scene and I had to run the last escape round twice. 🙂

But, that snafu aside, I did it. And somehow, it felt oddly right that I had to, kind of, do it twice.

Sphinxy is an occasional Mixer streamer at mixer.com/sphinxy. She plays a variety of games leaning towards casual, fun and RPG gaming, the likes of Minecraft, Stardew Valley, Assassin’s Creed: Odyssey, Final Fantasy, Lego games, sims and city builders, and indie games. Opinions are her own and do not necessarily reflect those of Tri-North Studios.

The first guest of Season 2 is Magick Unicorn! Magick Unicorn is a Mixer Partner, wife and mother of two, with a passion for gaming. […]

The Case for Easy Mode

Getting good isn’t always necessary if you just want to relax and enjoy the game. Let’s explore why easy mode is nothing to be ashamed of. […]

Thinking about streaming? Don’t miss Episode 2 of M³ Tech Talk where MepTech, Mossiprose, MysticMike, and Sphinxy guide you through the basics that you’ll need to go live for the first time. […]